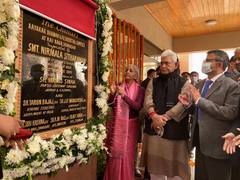 In her keynote address on the occasion, hon’ble FM Smt Nirmala Sitharaman thanked the people of Jammu & Kashmir for their contribution to the efforts in enabling the commissioning of ‘The Chinars’ Aayakar Bhawan and the attached facilities. Dedicating the project to the people of the Union Territory of Jammu and Kashmir, she said that the Income Tax office at Srinagar will act as a bridge to connect the people of the region to the best taxpayer services and also help them in their taxation issues through the Aaykar Sewa Kendra. She also observed that it will provide an enabling environment for the “bhagidari” i.e. people’s participation in the development of the region.

In his address, Shri Manoj Sinha, the Hon’ble LG of UT of J&K, highlighted the importance of taxpayers in the economic development of the country and said that the Income Tax department is becoming seamless from the stage of filing return to the issuance of refund. He observed that the success of the taxpayers will lead to greater economic development of UT of J&K. He also appealed to the taxpayers to honestly pay their taxes.

Shri Tarun Bajaj, Revenue Secretary to the Government of India in his address emphasised the increasing contribution of the UT of J&K to the exchequer, reflected in the upgradation of the Income Tax charge at Srinagar to the level of Principal Commissioner of Income Tax at Srinagar. He also said that the newly inaugurated Income Tax office will serve as a platform for providing information, knowledge, guidance and ease to the taxpayers, enabling them to reap the benefits of increased economic activity.

Shri. J.B. Mohapatra, Chairman, Central Board of Direct Taxes said that opening a new office in Srinagar will prioritise taxpayer services at the door-step of the people of UT of J&K.

The event marks a significant step towards realizing the Government of India’s vision of delivering quality taxpayer services and facilitating participation of all segments of taxpayers in Jammu & Kashmir in the nation’s tax system in a spirit of trust and respect. From a modest rented abode in Barbarshah in 1954 to one of the largest civilian offices of the Government of India in Srinagar, the establishment of the office with state-of-the-art facilities for the taxpayers reflects the commitment on the part of the Department to bring taxpayer services closer to the people of the region.

The 3.5 acres campus, adjoining the silk factory on the banks of River Jhelum, was acquired in 2008 at the cost of Rs 13.50 crores. The project was started in November 2015 by NBCC and was completed in July 2020. The total expenditure made till date is Rs 27.78 crore. The complex consists of a total of 8 buildings having office building of Principal Commissioner of Income Tax Srinagar and its associated offices, 33 Residential units and an eight-room guest house. The building has been constructed in keeping with various human-centric and eco-friendly schemes of the Government of India, such as the ‘Accessible India Campaign (SUGAMYA YOJNA)’ by providing facilities for the differently abled, using LED bulbs to save electricity (UJALA YOJANA), Swachha Bharat Mission, National Solar Mission, water harvesting and plantation of trees to promote environmental protection.

Following the inauguration of the building, the dignitaries planted saplings in the newly inaugurated premises to mark the event. Thereafter the hon’ble FM proceeded for an interaction with the tax administrators and stakeholders of J&K at the Sher-i-Kashmir International Conference Centre (SKICC) Srinagar later in the day.

In her interaction with tax administrators and stakeholders at SKICC, she urged the officers of both CBDT & CBIC to be agents of change and reach out to the industry and business individuals to ascertain their expectations from the Government. While emphasising that officers of both CBDT & CBIC should work collectively, Hon’ble FM also stressed upon the importance of their role as facilitators & educators, making themselves more accessible to the taxpayers of the region to provide better taxpayer services